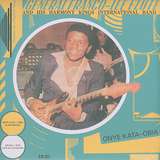 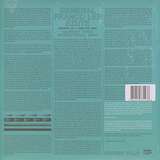 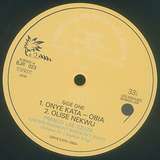 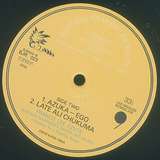 ‘For the casual fan of Nigerian music, certain names immediately come to mind at the mention of the phrase “Igbo highlife”—internationally recognized stars like Chief Stephen Osita Osadebe, Celestine Ukwu, Oliver De Coque, and The Oriental Brothers. Intermediate students of the genre might cite less universally lionized but still tremendously influential players like the Ikenga Super Stars, Mike Ejeagha, or Goddy Ezike. The true aficionado, however, is likely to chatter enthusiastically about someone like Franco Lee Ezute, and how he was the avatar of a spirited new take on the style that revitalized and redirected the genre in the 1970s and 80s.

To this contribution to the conversation, the purist might counter that Ezute, and others of his ilk (King Ubulu, Ali Chukwuma, Rogana Ottah, Bob Fred, Mmadu Osa International Band, etc.) despite singing in what appears to be the Igbo language and utilizing Igbo cultural motifs, technically do not qualify as Igbo highlife at all. Instead, they should be categorized as Anioma sound.

But what exactly is Anioma sound? Well, that can often be a complicated to quantify as the concept of “Anioma” itself, and both continue to stoke passionate debates: Is Anioma music simply a variety of Igbo highlife, or its own unique genre? And are the Anioma people Igbos… or something else altogether?

The word “Anioma” is an acronym encompassing the names of four language groups in present-day Delta State, Nigeria: Aniocha, Ndokwa, Ika, and Oshimili. The tongues spoken in these regions are generally considered to be mutually intelligible with standard Igbo, and are frequently counted among the over 30 distinct dialects of the Igbo language. Over the years, the Anioma peoples have variously been described as “Western Igbos,” “Bendel Igbos” and “Delta Igbos.” But many indigenes of this area stubbornly maintain that despite speaking variations of the Igbo language and bearing what sound like Igbo names, they are not of Igbo descent culturally or genealogically. Contemporary Anioma historians have popularized the theory that they are descendants of the Bini peoples in neighboring Edo State who migrated to the western border of Igboland and took on much of the language and culture. While there is not much substantial evidence to support this narrative, it’s one that is easy to believe when you listen Anioma music—specifically the highlife produced by the natives of the Ndokwa (or Ukwuani) area. On the surface it sounds like Igbo highlife, but something about it is… different.

Ukwuani highlife features Igboid lyrics, and the same kind of mellifluous, laidback guitar lines you’d expect to hear from the likes of Osadebe, but the rhythm section is often much harder. The basslines are deeper and more insistent, the percussion more aggressive and animated. In short, the rhythm is more reminiscent of Bini musicians like Sir Victor Uwaifo, Osakpamwan Ohenhen and Osayomore Joseph. This fusion of Edo and Igbo elements creates a sound of a particular intensity, one that brought new life to highlife at a time when it was sliding into the doldrums. Many players participated in this infusion of new energy, and one of the most influential was General Franco Lee Ezute’