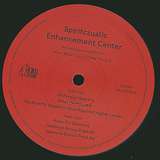 Spiritczualic Enhancement Center: Me and My Students Have Reached Higher Levels

‘Deep on a mind trip aboard the ISS Kingston, we are floating upon the low-gravity armchairs of its “Disco 3000” cocktail lounge. Brain-dance soundwaves are being distributed by means of the Akuphone, transmitting the psychedelic music of Spiritczualic Enhancement Center.

Me and My Students Have Reached Higher Levels presents itself as an obscure and ever-morphing spectral-jazz album. Produced by eight outernational musicians, once originating from Iran, Israel, America, Russia, Romania and Germany, this record carries a distinct centrifugal force. Suspending musical particles out of a brewish stew full of drones, bleeps and feedbacks, we hear a retro-futuristic sound which could have been Big Fun back in 1974. It makes us envision the electric dreams of an artificial intelligence modeled after Lee “Scratch” Perry. Given the task to create a dubby fusion requiem for Bela Lugosi’s Death, it seems Perry’s AI has been applied to a jukebox full of CAN’s and Sun Ra’s 7-inches.’